There’s more to Chios than mastic

There’s more to Chios than mastic

Chios has been on my to-go travel list for years. Growing up on Syros, I had the feeling that there are “blood” ties linking the residents of the island of Syros and those on the island of Chios. My father would often work on ships owned by Chios shipowners and steered by Chios sea captains and I’ve heard more stories starring “two guys from Chios” than I can recall. Many were the “guys from Chios”, mariners as well, whose hand was forced by history to leave the island to seek shelter in other, safer parts of Greece —Hermoupolis included— or even abroad.

Going a bit off topic here, my first trip to Chios with my son was unforgettable. We spent most of our time lying on the beach loungers, swimming (at Karfas beach, were it is so shallow you can practically wade to the Turkish coast where the waters are deep) and drinking Chios ouzo complete with appetizers. Within the spell of just one week, I think I managed to get a full picture of the ouzo situation on the island and, along with the ouzo bottles missing from my collection, I gathered some interesting information and experiences.

Here are some True / False statements from Chios distillers:

1. Saint Peter is the patron saint of distillers: TRUE

2. Chios ouzo from Chios contains mastic: FALSE. While there, I had mastic in sauces, croissants, candy, sodas but no mastic-flavored ouzo. The distillers I spoke with made it clear that mastic is used exclusively for the production of a sambuka-like liqueur called OUZOMASTIHA, which I’d never heard of before.

3. Ouzo from Chios contains sugar: FALSE. Although you can’t get it out of my mind or rather off my taste buds and I could swear I tasted sugar in their ouzo, all the distillers I spoke with vehemently denied adding sugar to their distillate.

4. The aniseed that grows in the southern part of the island is indeed the best of the best but not in sufficient quantities. So, importing more aniseed from Turkey is a necessary evil: TRUE.

5. All distilleries are still family-run businesses passed down from generation to generation. Today’s owners are the grandchildren or great-grandchildren of the distilleries’ founders, who inherited their secret ouzo recipes along with the family business: TRUE.

6. Before the advent of bottling, ouzo was transported in brass pitchers (bakires in Greek), carried by hand or, for long distances, loaded on donkeys. TRUE. 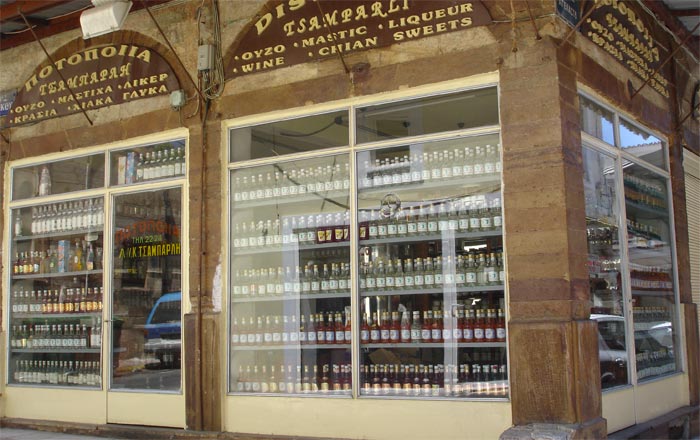 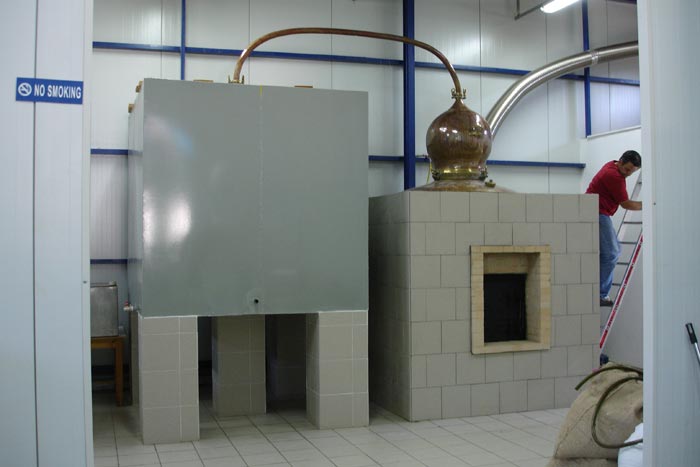 Outlet: 4, Sot. Linari St., Lahanagora Chiou, tel: (+30) 2271024680
Plant: Ververato
Est. 1925: under the name MASTROMICHALAKIS Distillery. Acquired in 1948 by the Psihis Family, represented today by Panagiotis and Giorgos Psihis.
Production: The distillate is produced in the two pot stills at the company’s modern plant in Ververato. Any quantities not consumed on the island travel to other destinations such as Athens, Thessaloniki, the Dodecanese, Germany, and the USA.
Labels: “PSIHIS”, “9” 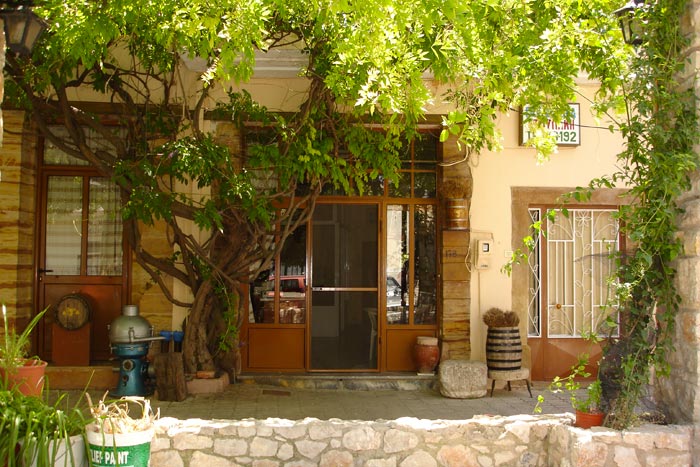 Outlet & Plant: Dafnonas, tel: (+30) 2271078192
Est. 1900: by Ioannis Stoupakis. The family business is run by the founder’s grandson by the same name.
Production: Covers the needs of the local island market; small quantities are shipped to Athens, Thessaloniki, and other islands.
Labels: “KAZANISTO” 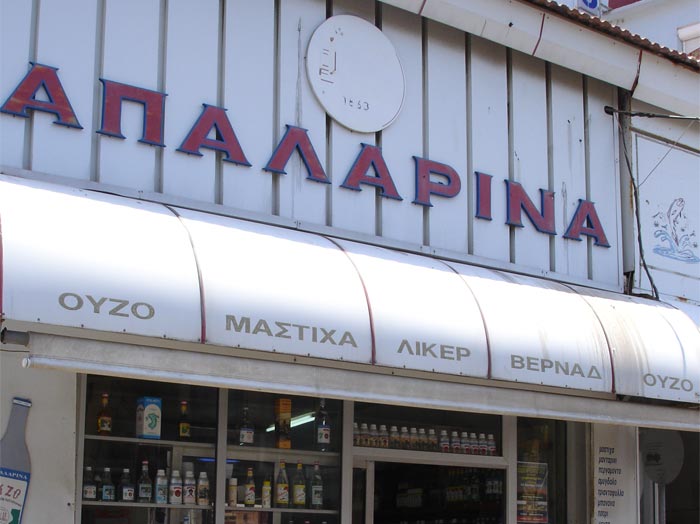 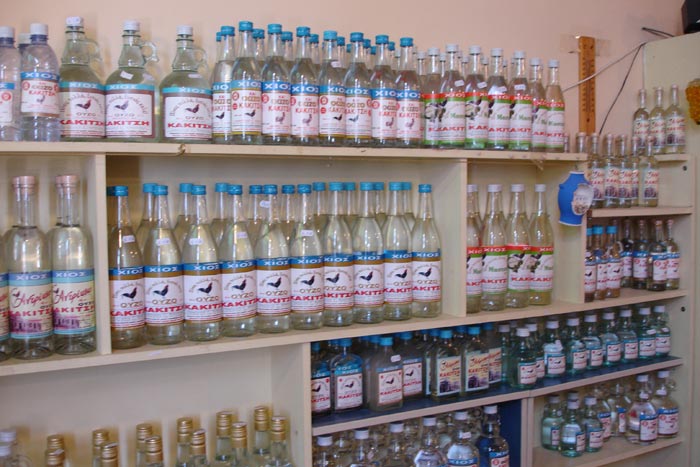 Outlet: Chios Port
Plant: Vrontados, tel: (+30) 2271023258, (+30) 2271092154
Est. 1863: by Kyriakos Kakitsis in Asia Minor. The family arrived at Chios in 1922 and has been running the business since then.
Production: Suffices to fulfill orders coming from Athens, Thessaloniki, the Aegean Islands, and some international customers.
Trademark: The distillery’s rooster and a slogan which roughly translates as “Drink ouzo galore, have morning headaches no more”.
Labels: “OUZO KAKITSI”, “ANTRIKEIO”, “MASTIHATO”, “OUZOMASTIHA” 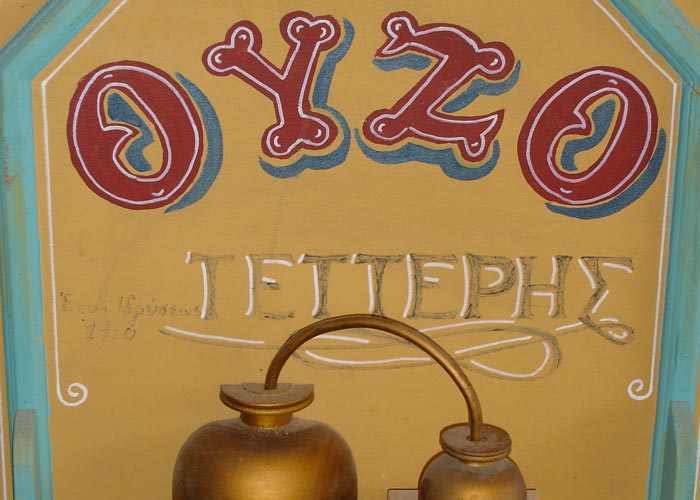 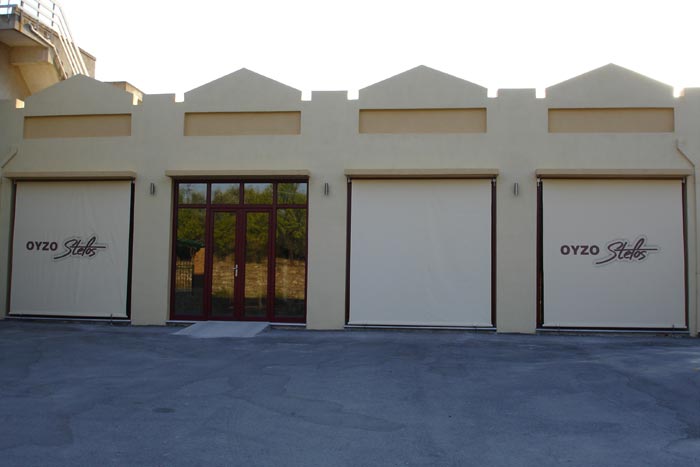 Outlet & Plant: Neochorio, tel: (+30) 2271031306
Production: With 30 years of experience in the production of souma (a traditional drink made from figs), Stamatis Monogioudis and his son Stefanos entered the ouzo market in 2007 with their 100% distilled ouzo, produced in their modern facilities.
Labels: “OUZO STEFOS” 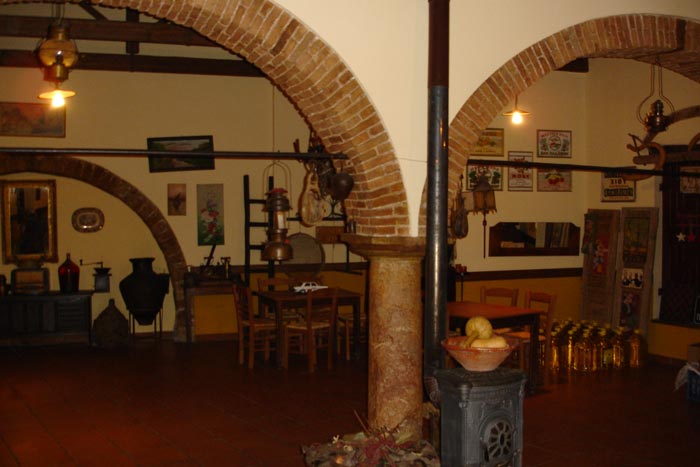 Address: 3, Kondyli St., tel: (+30) 2271042787
Est. 1882: by Dimitrios Linos. Today’s taverna proprietor is Yannis Linos, the founder’s great-grandson.
Production: The traditional still in this taverna —the best one on Chios in my humble opinion— produces ouzo exclusively for the establishment’s customers. Production and bottling for other purposes have stopped since 1950.

Last, it would be a major omission not to mention some of the island’s historic distilleries, which no longer exist: